Research on the tree swallow was initiated at the Creston Valley Wildlife Management Area from 1996-97 by a PhD student from the University of British Columbia.  At this time, approximately 180 nest boxes were erected 15-20 meters apart along dykes in the Corn Creek Marsh unit and they were regularly monitored.  The data collected from this study resulted in a doctoral thesis on provisioning in the tree swallow that examined metabolism and performance (Gary P. Burness, University of British Columbia, 2000).

Many of the boxes were monitored over the years since the study took place.  Some boxes were maintained, others taken down and new ones put up.  Since 1998, approximately 70 boxes are regularly monitored and maintained by CVWMA staff, volunteers and various youth participating in programs at the CVWMA.

Currently, there are 75 boxes that are being regularly monitored by volunteers and staff.  Boxes are checked from April to August approximately every 1-2 weeks, and the data is submitted to the BC Nest Record Scheme.

High school students also participate in various ways.  A woodworking class from JL Crowe Secondary School in Trail, BC constructed 44 swallow boxes for the CVWMA in 2008.  These were used to replace some of the old and deteriorating boxes.

Each year of monitoring seems to bring different variables and results. In 2009, we recorded just under 300 chicks that successfully fledged from the boxes.  Mortality was low that year – the spring weather was mild and insects were plentiful when the chicks hatched which surely helped.  In 2008, we saw a high level of mortality in the first spring clutch – it was a cold spring which can impact the available food source.  Many did nest again and were successful with just under 150 chicks that fledged from the boxes that season.  In 2010, we saw only 65 chicks successfully fledge.  There was a lot of predation on the eggs that year.

Invasive alien plant species pose a large threat to natural ecosystems and the native flora and fauna that live there.  At the CVWMA, the yellow flag iris is one of the invasive species that is negatively impacting the wetland.

Yellow flag iris (Iris pseudacorus), a beautiful garden ornamental, is an aggressive invader and has made its way into the CVWMA wetland ecosystem.

Some of the characteristics of this plant are as follows:

When plants are introduced into natural habitats such as ponds, marshes and other wetlands, they can form dense thickets and displace native species. Infestations can impact amphibians, birds, and other wetland animals.

Yellow flag iris can be identified by the following traits:

The main extent of the yellow flag iris at the CVWMA occurs along a slow flowing channel.  It also occurs in random clumps in some of the surrounding ponds.

Yellow flag iris is difficult to control because of its extensive rhizome.  Machines and fire are possible options for management but can have broader impacts on the wetland ecosystem.  Herbicides are another management option, but this is not utilized at the CVWMA due to their impact on the aquatic environment.

At the CVWMA, physically digging out the root system is one method used to keep the plant in check.  It is a hard and tedious job because of the water logged, muddy, and tangled root system.  Plants can root from one small rhizome left behind, so one has to be diligent at removing all the plant.  Clipping the seedpods also helps to eliminate the spread via seed and this can be done in the summer months while the seedpods are still attached to the plant and unopened.

High school students and community groups participate in our hands on habitat restoration projects in the wetland.  The removal of the yellow flag iris has been a focus of the program in the past few years.  Participants are provided with chest waders, gloves and shovels, so they are well prepared to physically dig up the plant.  Check out our High School Stewardship Program (link) for more information.

Once the plant is dug up, it is physically removed from the site and put in a gated compound where the plant material can dry and then be burnt to permanently eliminate the plant.  Progress has been made in some sections of the iris infestation, but there are many kilometers along the channel bank to still remove.  Once a section has been dug out, we have to return to that section in successive years to make sure the plant has not grown back and to dig up any plants that have spouted up again. 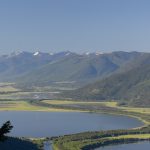